The Falklands are a windswept archipelago of 700 islands off the tip of Cape Horn, in the South Atlantic. There are two main islands, East and West Falkland. Habitat is largely grass plains, oceanic heath and peat moorland, with rocky feldmark formations on higher ground. The highest mountain is Mt Usborne at 705 m. The most striking feature of the climate is the strong persistent westerly winds.

Key habitats: The major habitat type is open Whitegrass Cortaderia pilosa plains. In a landscape without native trees, shelter is largely provided by tall Tussac grass Poa flabellate which occurs densely on offshore islands and around the coast of the main islands. Areas of Tussac have been drastically reduced since settlement in the 18th Century due to grazing livestock.

No. of Important Bird Areas: 21

Threats: The major threats are associated with fishing and the incidental mortality of seabirds, and competition for food. Excellent fisheries mitigation measures are in place in the Falklands, however, breeding seabirds are in danger on the high seas. On land, changes in farming practices, pasture improvement and expansion of the road network all lead to threats to natural habitats. Rapidly developing tourism is increasing pressure on remote offshore sites. In the soft peaty soil, fire is a constant threat. Oil exploration is likely to re-occur in the offshore waters and mineral exploration on land pose potential future threats.

Major programmes: Falklands Conservation is pioneering measures to prevent seabird deaths from fishing trawlers operating around the Islands. Our seabirds team works at sea for 50 weeks of the year and we supply mitigation measures to trawlers to reduce seabird mortalities. We rescue and rehabilitate oiled seabirds and have a training programme to save stranded marine mammals.

Tussac grass, a key habitat here where there are no native trees, is being replanted on East Falkland and fenced to protect it from damage by grazing. We have cleared rats from 15 islands, making them safe for re-colonisation by the many ground-nesting birds. We own and protect a further 18 offshore island nature reserves, providing undisturbed wildlife sanctuaries. Every five years we conduct a census of the entire Falkland penguin and albatross populations. 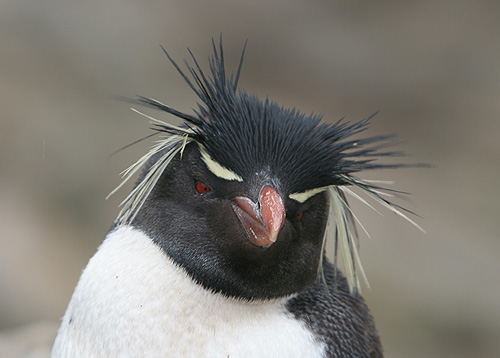 The Falkland Islands - March 17th – March 23rd 2012, author Barry Walker (link created December 3, 2012)
(During the Austral summer (October to March) the islands are inhabited by hundreds of thousands of seabirds that mass in great flocks.)