The Republic of Guinea is situated in western Africa, bordering the Atlantic Ocean with a coastline of some 300 km between Guinea-Bissau and Sierra Leone. With a list of over 600 species including little known species like Turati's Boubou and Emerald Starling in a country the size of Britain, birding can be done almost anywhere in Guinea and there are good sites near the capital, Conakry. Few birders, however, have visited the country and it is very underwatched ornithologically. Potential opportunities exist therefore for the more adventurous traveller or ornithologist.

The avifauna of Guinea is consequentially poorly known and large areas of the country have yet to be surveyed. Over 600 species have been recorded of which almost a hundred are Palearctic migrants and 17 are species of global conservation concern. The coasts are estimated to hold, at times, over half a million waterbirds, principally migrant waders.

A total of 18 Important Bird Areas (IBAs) have been identified by BirdLife International. The following five sites are coastal wetlands which reflects the importance of this habitat in Guinea for both breeding and migrant waterbirds: Iles Tristao west of the town of Boké has counts of over 5,000 Lesser Flamingo and breeding African Spoonbill and Caspian Tern; Rio Kapatchez south of the town of Kamsar has Hamerkop and Woolly-necked Stork nesting in the mangroves; Rio Pongo near the town of Boffa has breeding Goliath Heron and Yellow-billed Stork; Konkouré to the north of the Conakry peninsula has breeding Great White Egret and non-breeding Pied Avocet and Common Redshank and Ile Blanche some 10 km offshore from Conakry is a tern and waterbird roost. Ile Alcatraz and Ile du Naufrage lie 40 km south-west of Iles Tristao and hold a breeding colony of Brown Booby and act as a roost for thousands of terns.

The following three forest IBAs are in the south-east of the country: Massif du Ziama situated 40 km south-east of the town of Macenta is contiguous with the Wonegizi mountains IBA in Liberia and has 287 species recorded including Rufous Fishing-owl and Yellow-casqued Hornbill; Monts Nimba is one of the very few sites in the country for Sierra Leone Prinia; and Diécké Forest Reserve has Green-tailed Bristlebill, Yellow-bearded Greenbul, White-necked Picathartes and Gola Malimbe.

The following three IBAs are situated in the north-east of the country and contain representative species of the Sudan-Guinea Savanna biome: Badiar is north of the town of Koundara on the frontier with Senegal with Violet Turaco; Nialama is south-west of the town of Linsan with Fox Kestrel and Red-throated Bee-eater; and Chutes de la Sala due west of the town of Labé with similar species plus Bearded Barbet, Pied-winged Swallow and Yellow-billed Shrike.

Finally, Mafou is located in the eastern lowlands immediately west of the town of Kouroussa. The park contains a diverse avifauna with over 300 species recorded including 11 species of the Guinea-Congo Forests biome and 28 of the 33 species of the Sudan-Guinea Savanna biome recorded in Guinea. Species are similar to those mentioned for the previous 3 IBAs in the north-east of the country and include in addition Senegal Eremomela, Gambaga Flycatcher, Splendid Sunbird and Grey-headed Oliveback. (text courtesy African Bird Club) 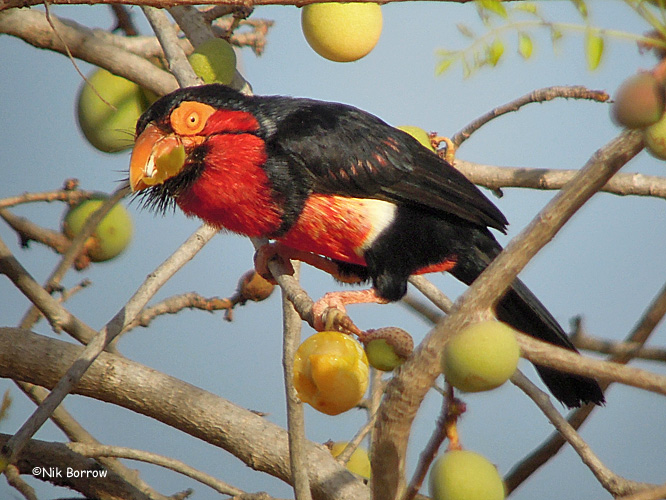