Jordan is an exceptional place for bird watching as its geographical position means that it is a hub for migratory species from Europe, Africa and Asia. The birdlife of all three continents passes through Jordan twice a year on their passage between seasonal habitats. All of Jordan makes for good bird watching, yet some sites in particular are treasure troves for twitchers.

Jordan is so important to bird species that almost 10 percent of its entire landmass has been designated an Important Birding Area (IBA). 17sites in Jordan have been declared IBAs; in order to qualify for this title the area must provide an essential habitat for one or more species.

The wetlands of Azraq, out in the Eastern Desert is a favoured stopping off point not just for waterbirds but many other species, including raptors attracted by the wealth of prey. Depending on when you visit, some of the bird species you might see in Azraq are cranes, Desert Lark, Temminck's Horned Lark, Hoopoe Lark, Trumpeter Finch and Desert Wheatear.

Straddling the edge of the Great Rift Valley, the Dana Reserve is Jordan's largest nature reserve, with 320 sq.km of shark-tooth mountain ridges with towering cliffs, sandstone, limestone and granite canyons, eroded into exquisite landscapes. Birds of prey are well represented in the Dana Reserve too; there are many migratory species, as well as Bonelli's Eagle, which breed there. Dana is also a good place to spot Syrian Serin. At times, the skies of Jordan are full as the dramatic spectacle of thousands of Black Kites, Steppe Eagles and Steppe Buzzards soar overhead.

The Rose City of Petra is not all about antiquities, it is also an excellent place for birds, with at least two interesting species found here: Hume's Tawny Owl and the pretty Sinai Rosefinch. (text courtesy of Responsible Travel) 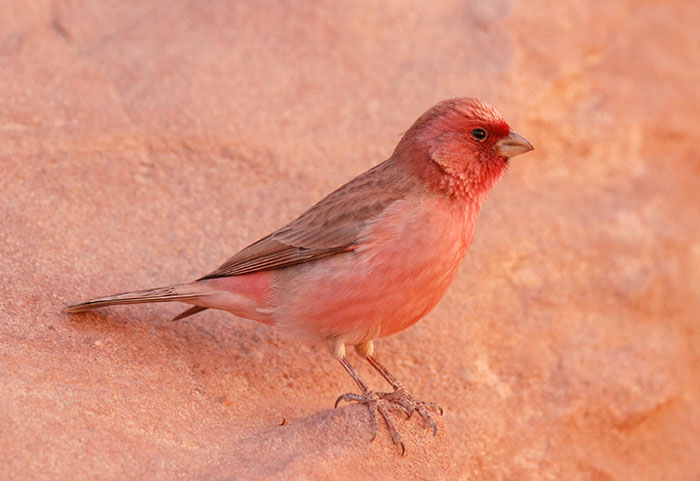