Mexico, land of the Mayas, Aztecs, Zapotecs and Conquistadores, is one of the most charismatic countries in the world. Sombreros, white-clad peons on a stubborn mule and siestas conjure up a sleepy image which disguises (as well as any Zapata-style moustache) a country rapidly entering the modern world, where good roads, accommodation and food are the norm, and birding always rewarding. It is the third largest country in Latin America, with an incredible variety of habitats ranging from steamy tropical lowland jungle and barren cactus-studded hills to refreshing pine forests and high alpine vegetation above the treeline. Over half of the country is at an altitude of over 3300ft (1000m) and much of that at over 6600ft (2000m), and more than 80% of this splendid nation is classified as having a semi-arid climate.

Mexico basically consists of a high central plateau flanked by an eastern and a western range of mountains set back from the coast. Mexico, both culturally and ornithologically, is a land of stark contrasts. A transitional zone between the temperate North American continent and the lush rainforests of Central America, Mexico’s position, physiography and contrasting habitats have produced an endemic-rich avifauna which, remarkably, is third only to Brazil and Peru amongst New World countries. Amazingly, no fewer than 213 species of birds are restricted to Mexico and northern Central America! Mexico is also the wintering ground of a splendid selection of colourful migrants from North America and the mixed warbler flocks are a real feature of its woods. The central and southwestern parts of the country are the richest region for birds in all Mexico.

In the state of Chiapas, in far southeastern Mexico, breathtaking scenery at the El Sumidero Canyon near Tuxtla Gutierrez is augmented by the delightful Red-breasted Chat, the nomadic Slender Sheartail and the rare Belted Flycatcher, while not far away the striking but almost unknown endemic Nava’s Wren inhabits limestone karst outcrops. The sprightly, near-endemic Pink-headed Warbler inhabits the cool mountain forests where birders can also find Blue-throated Motmot and Black-throated Jay.

The arid scrub of the Isthmus of Tehuantepec and coastal Chiapas is home to Orange-breasted and Rosita’s Buntings, two of the most stunning of Mexico’s many endemic birds, and the amazing Giant Wren and the retiring Cinnamon-tailed (or Sumichrast’s) Sparrow are likewise found nowhere else.

In the Pacific lowlands and foothills around Puerto Angel the semi-deciduous woodland holds three extremely localized endemics: Oaxaca (or Blue-capped) and Cinnamon-sided Hummingbirds, and the stunning little White-throated Jay. The offshore waters often produce Black Storm Petrel and Townsend’s Shearwater, together with an excellent selection of other pelagic species.

Continuing north, the deserts and woods around the attractive city of Oaxaca hold many endemic birds, such as the Beautiful Sheartail (or Beautiful Hummingbird), Dwarf Jay, Ocellated Thrasher, Collared Towhee and Bridled and Oaxaca Sparrows amongst others.

In the state of Veracruz the pine-oak forests of the Sierra de Juarez hold a range of specialities, including Unicolored Jay, Slate-colored Solitaire and White-naped Brush Finch, while in the Cordoba area the limestone outcrops are home to the restricted-range Sumichrast’s Wren.

In a remote corner of this incredible country lives a semi-mythical bird that every international birder craves to see, the spectacular Horned Guan. The best place to admire this mind-boggling species is the wonderful Biosphere Reserve of El Triunfo, located on the highest ridges of the Sierra Madre mountains in the southern Mexican state of Chiapas. The El Triunfo cloud forest is often enveloped in a mantle of mist and is one of the most pristine and diverse natural areas remaining in Mexico. With an avifauna of more than 400 species, El Triunfo holds some of the most fascinating and enthralling birds of the American tropics. With its striking red ‘horn’, piercing white eyes and arresting blue-black and white plumage, the Horned Guan is surely one of the most outstanding birds in the world.

Text courtesy, Birdquest, who has operated tours to Mexico since 1987. 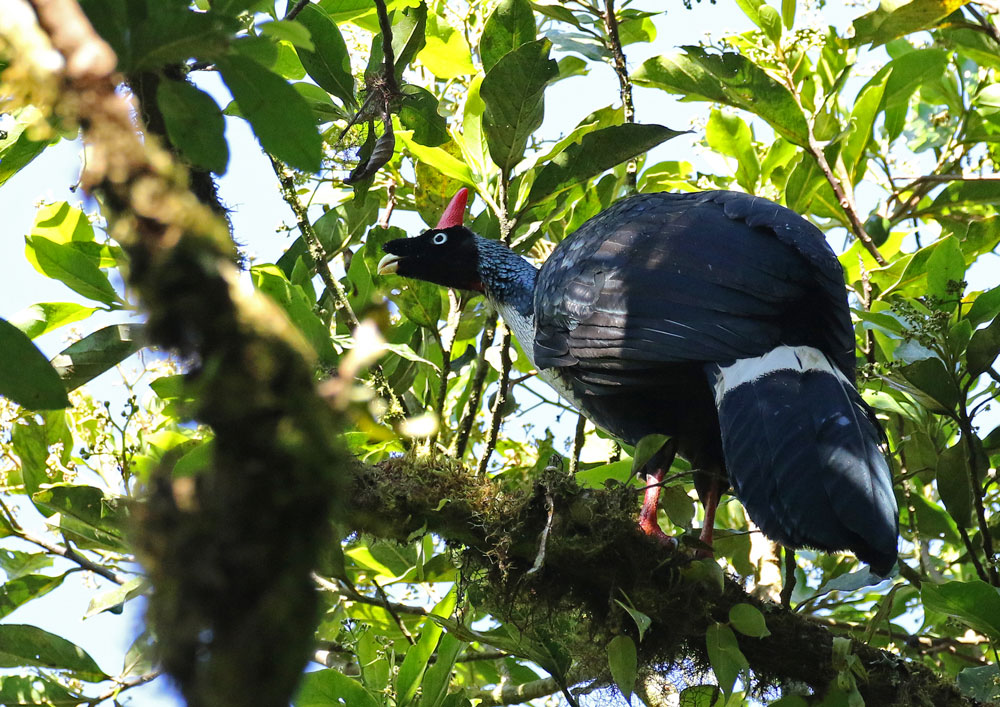 Gorda Banks, off Baja Cape, Mexico, After much debate and correspondence, a author Naturetrek (added April 10, 2014)