Poland is situated in the centre of Europe. Its 788 km of coastline runs along the Baltic Sea in the north, and it rises to 2,499 m in the Western Carpathians and 1,602 m in Sudeten in the south. 91% of the land surface lies below 300 m elevation. The largest river, the Wisla (Vistula), is 1,047 km long and runs through Poland from south to north. Inland water bodies cover 8,340 km2; cities, towns and villages 10,610 km2; and roads etc 9,540 km2. Legally protected areas cover 91,304 km2. Key habitats: Agricultural land in Poland covers 185,040 km2 and consists of small fields and pastures with trees, bushes, small water bodies etc. Wetlands, such as Biebrza Marshes, and mires total 15,000 km2, whilst woods and forests cover 91,220 km2 and include primaeval European lowland forest in Bialowieza, and remnants of riverine forests. Coastal and marine habitats are important wintering areas for waterfowl and auks.

Number of National Parks: 23 (totalling 314,532 ha) The BirdLife Partner Designate: Polish Society for the Protection of Birds (OTOP). Date founded: 19 December 1990. Members: 2,100 Major current programmes/areas of work: OTOP has developed a national Important Bird Area (IBA) programme since 1992. 81 IBAs have been identified (plus an additional 86 areas of national importance), an IBA inventory has been published (1994) and an up-to-date IBA database is maintained (and will soon be published).

OTOP manages its own reserve, Karsiborska Kepa, which hosts breeding Aquatic Warblers Acrocephalus paludicola (Vulnerable), waders and wildfowl. OTOP is co-operating with the Ministry of Environment, several NGOs, national parks, local administrations and scientists in developing and implementing an Aquatic Warbler Action Plan, following a national survey of the species in 1997. 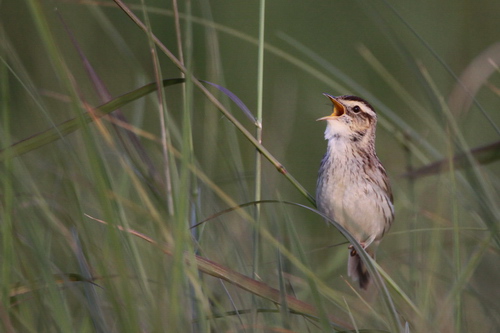 Poland - 28th May - 4th June 2018, author Chris Lotz, Birding Ecotours (link created June 24, 2018)
(The tour visited the bird-rich fishpond area around Zator to the southwest of Krakow before venturing south to the mountains along the Poland and Slovakia border.)