Sri Lanka is a tear drop shaped island in the Indian Ocean separated from the Indian peninsula by the Gulf of Mannar and the Palk Strait, which at its narrowest is just 32 km. The island is 432 km from north to south and 224 km from east to west. It is about twice the size of Belgium or a third larger than Switzerland. There are fine sandy beaches around most of the island.

On the south coast are the Dutch fortress towns of Galle and Matara and beyond them the sanctuaries of Kalametiya and the national parks of Bundala and Yala. Here the jungle belongs to elephants and leopards.

Eco-tourism is attracting more and more visitors to Sri Lanka. The islands' isolation from the mainland, two diagonally blowing monsoons shedding water into a mountainous core, has created a variation in climate which is normally found only across a continent. The wet lowlands rainforests and the cloud forests in the highlands teem with an endemic bio-diversity found nowhere else in the world. Endemicity is high with a quarter of the flowering plants, and half the amphibians and reptiles endemic.

By concentrating on Sinharaja, Kithulgala and Horton Plains National Park the birdwatcher can see nearly all of Sri Lanka's endemic bird species in two weeks . 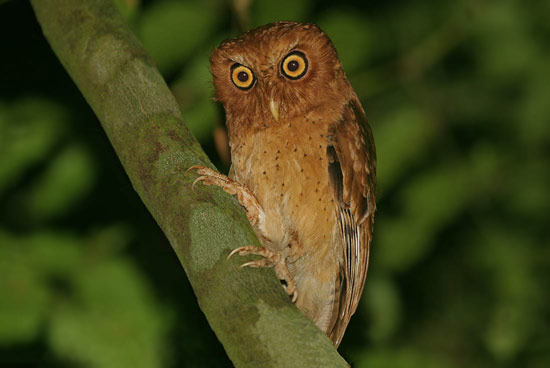 Sri Lanka - Endemic Birds - 15th - 24th August 2015, author Naturetrek (link created November 7, 2015)
(All thirty-three endemic species of birds were seen during the tour. The elusive Sri Lanka Whistling Thrush kept the group running in circles, but eventually showed itself in full view, which was a delight.)

Sri Lanka - A Birding, Wildlife, History, and Culture Tour - 13th Feb - 8th March 2006, author Sue Ebbutt & Alan Smith (added May 27, 2006)
(Being keen but novice birders, we wanted a tour that would give us the opportunity to see as many of the birds of the country as possible, but also other wildlife, historic and cultural sites.)

A Wildlife and Birding Tour in Sri Lanka after the Tsunami, 5th- 26th February 2005, author Mike Hillman (added March 28, 2005)
(All bar two of the Sri-lankan endemics with visits to Yala, Bundala, Sinharaja, Sigirya, Horton Plains and many other sites)

Sri Lanka - December 2012 - January 2013, author Owain Gabb (link created March 24, 2013)
(We saw all the endemic birds, a lot of great mammals, herpetofauna and invertebrates and had a lot of fun doing it.)

Birding in Sri Lanka - 3rd February - 23rd February 2006, author Alec Crawford (added June 9, 2006)
(The next two days were spent in the Sinharaja rain forest where most of the endemic birds can be found)

Sri Lanka - November - December 2006, author Simon Hartill (added April 12, 2007)
(Our guide excelled in finding us all the endemics and most of the specials that were on the target list.)