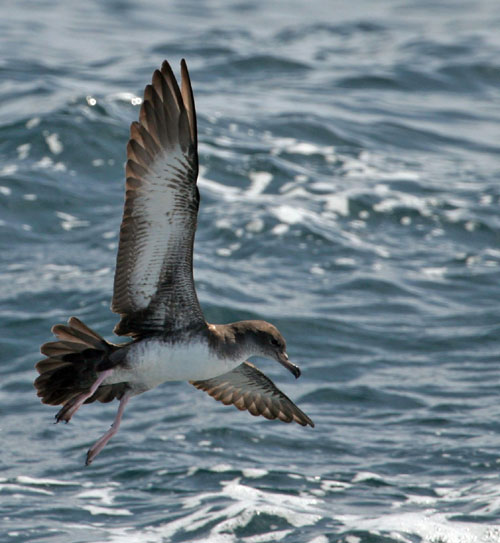 Surrounded by the blue waters of the Pacific Ocean, land was nowhere in sight. Through the shimmering haze, a speck moved on the horizon. The speck grew larger and turned into a “shearwater.” Todd McGrath, never taking his binoculars from his eyes, called to the bridge, “Stop the boat!”

We were on a quest for rare seabirds aboard the Searcher, a 95-foot live-aboard natural history boat, exploring seldom birded regions near the edge of the continental shelf. Todd studied the distant bird while murmuring to himself, "It doesn't look quite right… (pause)… what is it?... (pause)… probably just a Pink-footed, but… no… it just doesn't look right…"

As the bird drew nearer, Steve N. G. Howell (who was photographing the bird from the lower deck) shouted, “Look at the rump!” There was a pause as Todd studied the bird – then he thundered, "DARK-RUMPED PETREL! DARK-RUMPED PETREL!" The pterodroma approached, flew directly to the boat, took a look at us and looped back the way it had come. Everyone aboard had a good look at this mega-rarity – one of a handful of sightings of Dark-rumped (Hawaiian) Petrel off the coast of California. I get goose bumps just writing these words as I recall the electricity of that moment.

I moved my family from Michigan to Southern California in 1998 for the sunshine and lack of snow – the culmination of a lifelong dream – only to discover much more than a warm Mediterranean climate. Stretching endlessly beyond the western horizon was California’s 7000 mile “back yard” of Pacific Ocean – a vast and uncharted frontier, enormous beyond comprehension, replete with little-seen and even less understood life forms.

My first taste of pelagic birding came on an Audubon Christmas Bird Count with ocean-lover Dave Povey who has done the “at sea” portions of two San Diego area CBCs every year for 31 years – 62 counts in all. Dave showed me a world of birds that most people have never even heard of, with strange names like skua, jaeger, shearwater, auklet and storm-petrel. I was hooked.

One morning, far offshore, Dave squinted ahead and exclaimed, “Now, that’s a ton of birds!” The sky above the western horizon was black with a giant feeding-frenzy of shearwater, gulls and terns. Dave turned his 21-foot fishing boat and we motored over to investigate. Thousands of birds were soaring, diving, screaming, brawling and gorging themselves on fish. 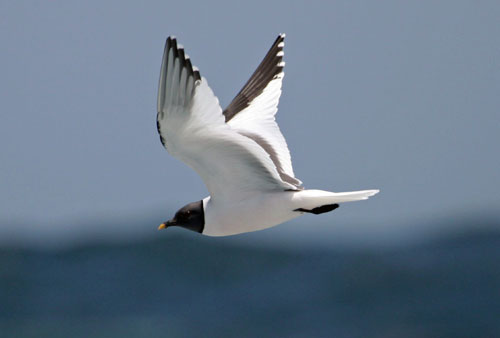 In the midst of the melee was an amazing spectacle – five acres of suction-cupped tentacles protruding 18 – 24 inches above the surface of the sea, waving back and forth, appearing for 2 – 3 seconds then submerging, only to resurface a second or two later – a surreal Alice In Wonderland spectacle of hundreds of reddish-brown "tentacle bushes waving in the wind.” Giant squid! Southern California was in the midst of an influx of Humboldt Squid. These large squid typically inhabit depths of 2,000 feet but had driven a school of small anchovy-sized “bait-fish” to the surface and were dining on them. The shearwaters, gulls and terns, being the opportunists they are, elbowed in to join the buffet.

As amazing as birding can be within 40 miles of shore, an even more exciting world awaits further out – beyond the reach of day boats. These waters are home to exotic birds like albatross, tropicbirds and deep water pterodromas.

The ocean floor off California is anything but flat. Enormous mountains (alternately called seamounts, ridges, domes or banks) and valleys (submarine canyons) lie beneath the surface. When deep ocean currents push nutrient-rich water into a seamount, it rises, warms, and gives birth to fast growing phytoplankton, microscopic plants that in turn become the food of zooplankton, tiny marine organisms, which in turn become food for fish and other marine life. Finally, the fish and marine life attracts birds and marine mammals by the thousands.

Fisherman have known for years where the action is – at these life-zones where nutrient-rich water is forced up. Thus, the invisible seamounts, ridges, domes and banks are well charted on the continental shelf. Finding birds, especially exotic seabirds, involves spending time at these life-zones at the right time of year, under the right conditions. 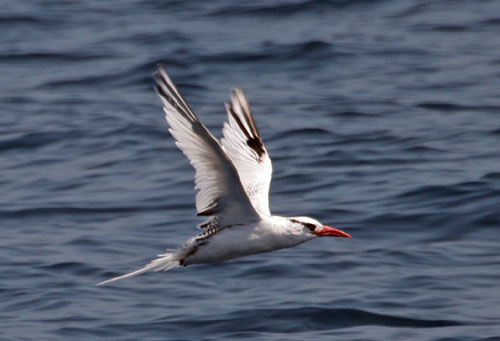 While several life-zones are within striking distance of a day trip, much of the day is spent crossing barren underwater deserts with few birds. Birding time is therefore limited before having to turn around and head back home. Some of our most productive birding areas in Southern California lie eight hours or more off shore. To comfortably reach these zone and have the time to study and enjoy the birds they attract, we need to spend 2-4 days way out there, in the land of the albatross and pterodroma.

The secret to finding rarities (like Red-billed Tropicbird, Cook’s and Murphy’s Petrel) and mega-rarities (Red-tailed Tropicbird, Bulwar’s and Hawaiian Petrel) is to be out there, chumming, looking, ready. Expert spotters/leaders and a crew that understands how and why birding is different than fishing greatly increase the odds of finding great birds and ensuring all participants see the birds. 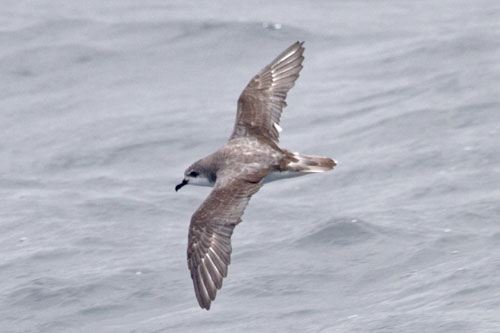 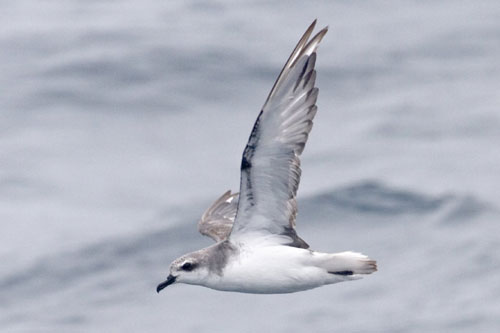 The captain and trip leaders use marine radio to learn where other boats are seeing fish, bird and mammal life. Once we’ve charted a course to the most promising zones, we pay careful attention to the weather, water temperatures and ocean currents. Often we’ll attract birds by creating huge chum slicks of a foul-smelling concoction of fish-oil, fish-parts and popcorn.

Through 2007, the only regularly scheduled, live-aboard birding expedition on the west coast has been the Searcher 5-day expedition sailing from San Diego. Searcher was selected by experienced pelagic birders Don DesJardin and Walter Wehtje in 2003 because it is large, steady, spacious and spotlessly clean. Equipped with excellent sleeping accommodations, 4 bathrooms, hot showers and delicious meals, Searcher makes for a fun and comfortable adventure.

Five-day trips depart at noon on day one and return at 8:00 a.m. on day five. We travel north along known life-zones to the Channel Islands before heading west into deep water and points near the edge of the continental shelf. The exact itinerary and zones visited varies based on weather, sea conditions and the leaders' and captain's judgments about bird abundance.

We never know what we’ll see, but one thing is for sure – we always see great birds. The ultimate birding is being in deep water for nearly 100 hours on a comfortable boat with 32 other passionate birders including many of the top pelagic experts and ABA listers in the country. 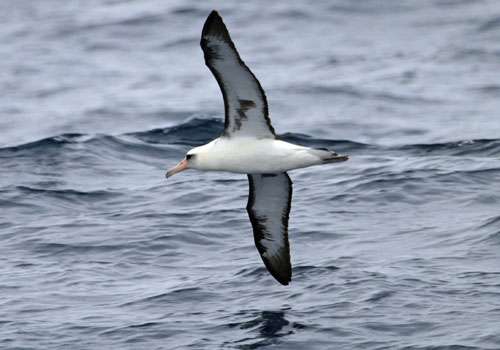 Still awaiting discovery on a Searcher trip are other mega-rarities like Stejneger’s Petrel, Wedge-tailed Shearwater, Great-winged Petrel, Short-tailed and Light-mantled Albatross. It’s just a matter of time. Searcher has only been seabirding since 2003. If you examine Searcher trip reports at www.bajawhale.com/birdingtrips.asp, you’ll see that a rarity or mega-rarity is found on every trip; it’s just that nobody can predict which one!

Extraordinary birds have been seen off southern California recently. There’s no telling what will show up in 2008, but it will be a surprise, like the afternoon Todd McGrath spotted a dark pterodroma. "MURPHY’S PETREL! MURPHY’S PETREL! MURPHY’S PETREL!” brought everybody topside within 10 seconds. As the petrel headed away, big scoops of stinky chum were slung overboard. The petrel circled and flew back to the boat to investigate the “delicious” scent. It came in low, less than fifty feet from 32 pairs of eyes. It was an exhilarating experience, one that can only be experienced in deep water.

Now that I’m retired and hungry to seabird from boats, I’ve had the opportunity to charter a boat for several two-day deep-water expeditions from San Diego in 2008. We’ll depart on Saturday afternoon, bird the 9-mile bank until sunset, have dinner, go to sleep, and wake up Sunday morning one hundred miles offshore – about as far south in the Pacific Ocean as you can go in the ABA area. We’ll spend all day Sunday in the albatross/pterodroma zone, enjoy another sunset, have dinner, celebrate our sightings, go to sleep and wake up Monday morning back in San Diego. Learn more at www.SoCalBirding.com

Out on the Pacific Ocean, under the sun, riding the swells with the clean fresh breeze on your face, days blur into a soft dream. Time slows, even stands still, as you become more and more disconnected from the hustle and bustle of the “real” world. No cell phones. No computers. No traffic. No meetings. Nothing but sunshine, whales, birds, people who love birds and birding. THIS, is the real world…. the ultimate adventure. That “other” world, the one you left behind is…. so… far…. away….

Terry Hunefeld retired in April, 2007 as CEO of By Referral Only, a national training company headquartered in Carlsbad, California. He and his wife own and operate a Bed & Breakfast on the Pacific Ocean near San Diego www.310Neptune.com

Terry birds every day, as much as possible at sea www.SoCalBirding.com

His email signature includes his philosophy: “Life is short. Bird often.” Art and Celia Condit, owners of Searcher, took a chance on “birders” and have run two or more 5-day trips each year since 2003. www.bajawhale.com 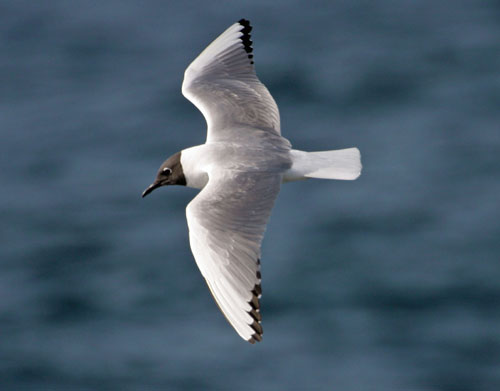 This article was first published in Winging It, February 2008, newsletter of the American Birding Association,