Spanning the equator and bounded in the west by Africa's Great Rift Valley, Uganda is a country of great natural beauty and geographical diversity. The soaring volcanic peaks of the Virunga and Rwenzori Mountains, a chain of huge inland lakes, the source of the mighty River Nile, large areas of savannah and acacia dotted grassland and large tracts of primary forest which include the western edge of the great Ituri Forest of the Congo Basin and Bwindi Impenetrable Forest, these habitats are home to a great diversity of bird and animal life. Often referred to as the "Pearl of Africa" Uganda boasts a list of around 1080 bird species including the legendary and monotypic Shoebill probably more accessible here in Uganda than anywhere else in its limited range of the papyrus swamps of east central Africa. The birdlist also contains the very localised Albertine Rift endemics of which 23 out of 24 may be found in Uganda. Uganda's national parks reflect the extraordinary diversity of the country. Murchison Falls, divided by the River Nile is Uganda's largest park. Mount Elgon, the 4th highest mountain in East Africa whilst Semuliki and Kibale national parks offer abundant bird and other wildlife. (check out Graeme Wallace's trip report) 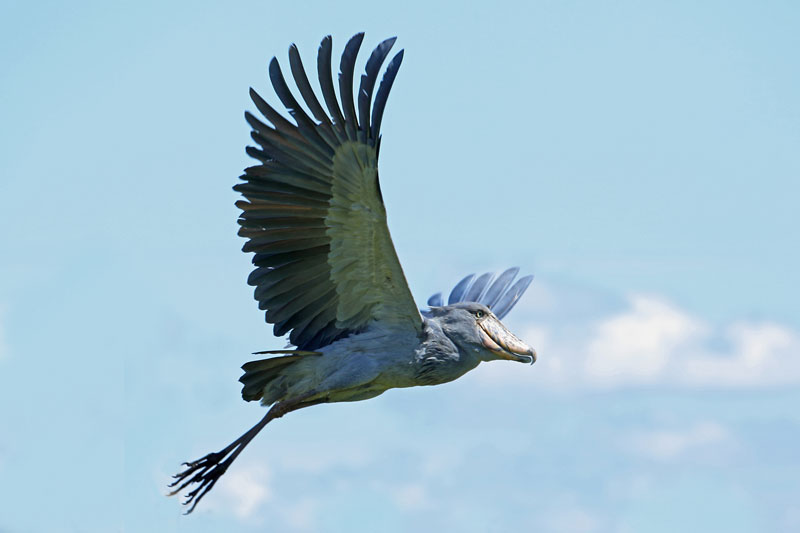 Uganda - 3rd - 25th August 2006, author Pete Morris (link created October 29, 2007)
(Uganda is a must for any birder. Home to a number of albertine rift endemics and an excellent place to see a large number of otherwise difficult 'West African' forest species.)

Uganda - 1st - 17th July 2018, author Chris Lotz, Birding Ecotours (link created October 13, 2018)
(This tour of Uganda focused on the main sites of the central and western reaches of the country, with the exception of the Semliki Valley and Mgahinga National Park.)

Uganda - August 2011, author Andy Mears (link created November 23, 2011)
(When Green-breasted Pitta was ‘unmasked’ a couple of years ago, and became a realistic possibility on even a short visit, the country zoomed firmly to the top of my list.)