Thailand is, simply put, the quintessential birding destination in Southeast Asia. From mountain peaks draped in Rhododendron forests to the dense tropical lowlands resounding with birdsong, you will constantly be refreshed by the wealth of this delightful destination. These treasures extend beyond Thailand's natural world into the cultural realm, with spectacular pagodas and holy shrines adorning this tropical nation.

Birders arriving in Thailand via the capital Bangkok will most likely first explore the forested hillsides of Khai Yai National Park where a vast array of broadbills, hornbills, bulbuls, babblers and barbets can be encountered.

After scanning the mudflats near Samuth Sakhon for migrant waders (including the world's most sought-after and endangered Spoon-billed Sandpiper) many birders continue on to Kaeng Krachan National Park with its unbroken forest scenery and one of the richest bird species lists in Southeast Asia. Species here include assortments of bee-eaters, pigeons, broadbills, laughingthrushes and leafbirds amongst others.

Further north lies the mountain forests of Doi Inthanon, Thailand's most famous birding site, where a whole collection of uniquely Asian groups such as ioras, barwings, mesias, minlas, sibias and niltavas can be encountered. Further north, the mountains of Doi Angkhang on the border of Myanmar offer the opportunity to see a host of localized and range restricted species including Siamese Fireback, Silver-breasted and Dusky Broadbill, the spectacular Coral-billed Ground Cuckoo, Blue and Eared Pitta, White-rumped Falcon, Green Cochoa, Giant Nuthatch and Green Peafowl.

The remnant lowland forests on the Malay Peninsula in the south of Thailand support some of the world's most sought-after and endangered bird species including the critically endangered Gurney's Pitta. Nearby mangroves are home to the Brown-winged Kingfisher and Mangrove Pitta whilst the mudflats support wintering Chinese Egrets and waders including Nordmann's Greenshank. 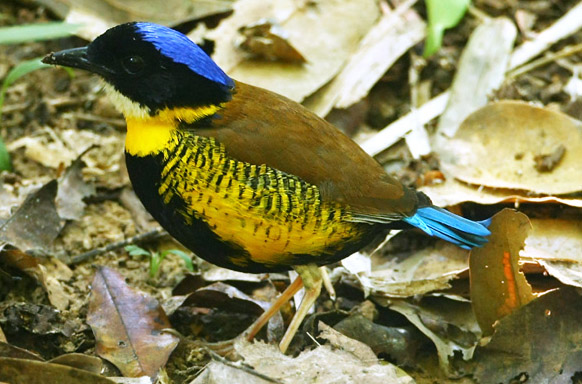 Central Peninsula Thailand - April - May 2015, author Birding Ecotours (link created September 29, 2015)
(The timing was chosen as these months are a good time for pittas and broadbills and other forest birds)

Thailand; Six day tour of central peninsular Thailand. April 2011, author Birding2asia (link created May 24, 2011)
(The female Banded called from the forest floor on the left of the path while the male Gurney’s stood on a fallen log to the right and shouted back. We couldn’t have asked for better views. Five Pittas in five days – remarkable...)

Birdwatching in Thailand – 24 February to 8 March 2008, author Andrew Howes (added June 30, 2008)
(Arrived at the salt pans at Pak Thale and within minutes had close views of two Spoon-billed Sandpipers)

Thailand; North & central, November 2011, author Stijn De Win (link created February 5, 2012)
(I may have written this in other trip reports. B2A does like a good start to a trip. But what if the first bird seen turns out to be the best one? Regard anything else a bonus? That would be hard with sightings of ...)

Thailand - an introductory trip - Jan 11th-21st 2007, author Joe Cockram (added April 11, 2007)
(This trip to Thailand was a stopover on the way back to the UK after 6 months backpacking in Australia and Fiji.)